winner of the BauhausSOLAR Award 2012. 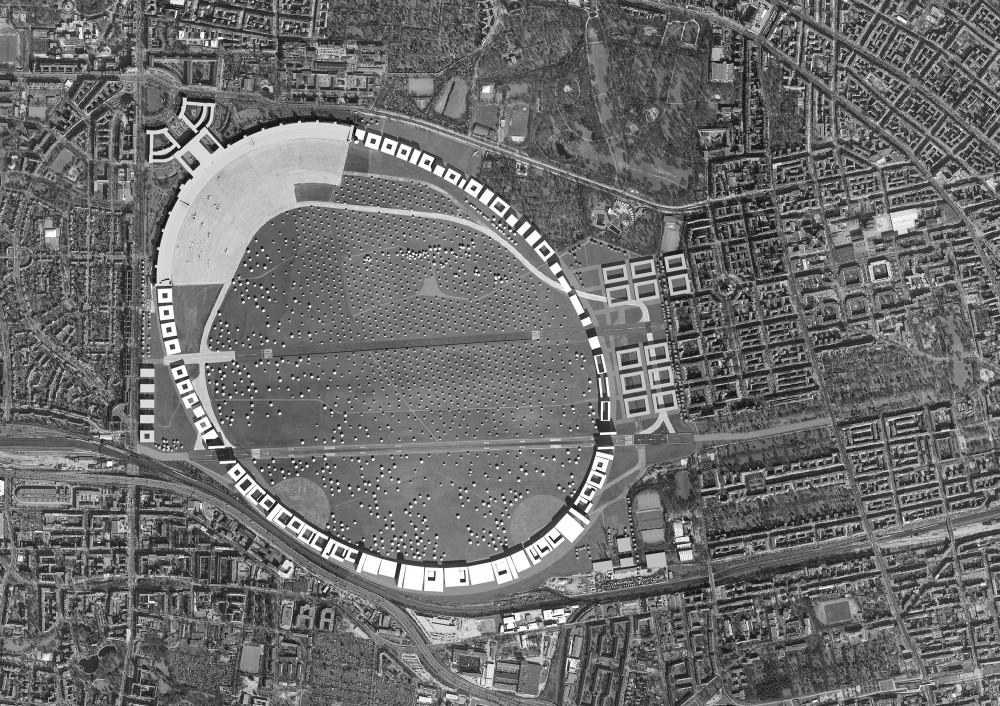 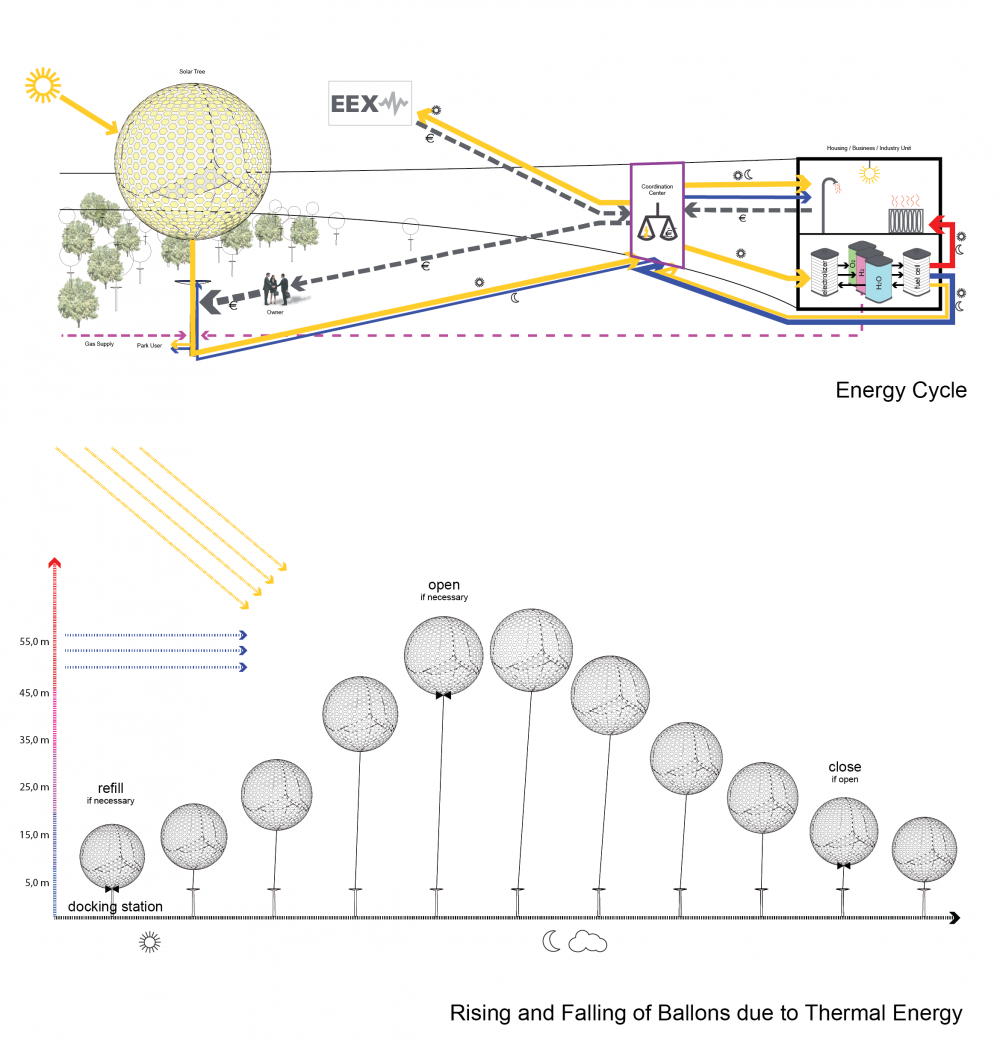 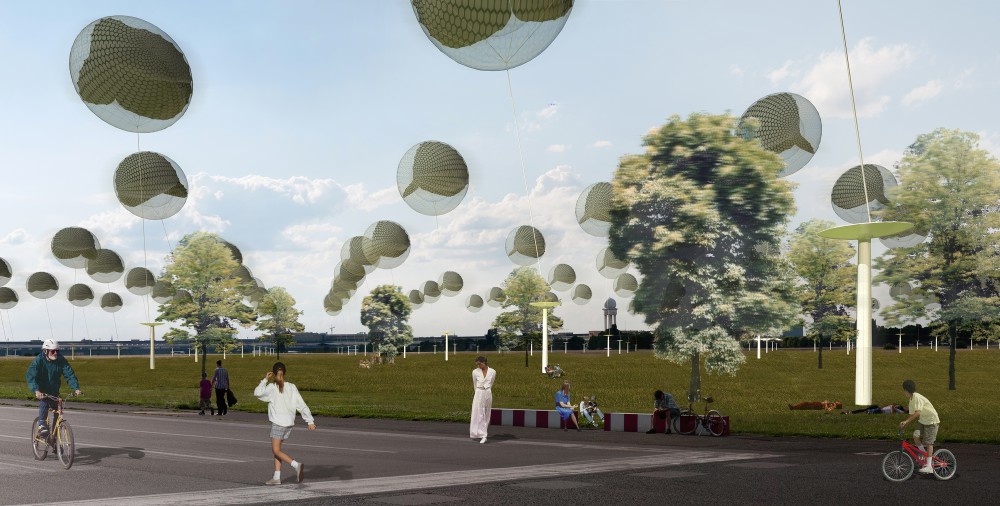 In October 2008, the former airport Berlin Tempelhof was closed for air traffic. After countless competitions and intense deliberations on its future use, the airfield was eventually opened to the public. Throughout the past years, this open space in the center of Berlin developed into a popular park, drawing its charm from the historic relevance, as well as its untouched appearance and scale-less size.

The following proposal addresses the Tempelhof airfield on many different levels, from urban planning, through architecture and landscape planning to product design.

A dense urban ring surrounding a public park emerges on the area of the former airport Berlin Tempelhof. Forming a clear and closed boundary, this pearl-necklace of different functions and forms manifests itself to the inside as large-scale form in the dimensions of the airport. On the outside however, towards the city, it dissolves in single units in the scale of Berlin’s urban fabric. This ring forms, and protects the public greenery of the Tempelhof airfield in the center of the German capital.

Forming a “Solar Forrest”, this open space is then densely populated with trees, partly natural, mostly however artificial “solar trees”. Together, they comprise an innovative research power plant, which also spends shade to Berlin’s inhabitants for their recreational activities such as sport, pick-nick, barbeque or simply relaxation. However, solar trees not only produce energy and offer shade, they also work as charging stations for electronic devices or act as individual light sources in the evening hours, and thus change the perception and usability of the park.

The high level of identification of Berlin’s citizens with their former airport became evident in the debate on how it should be used after its closing in 2008; a development on the field was immediately out of the question. Activating the “tree crowns” of the Solar Forrest, on the other hand, allows for a profitable use of the area without restricting the spatial or visual openness of the park or its accessibility.

The power plant’s assembly out of single solar trees favors crowd-funding options through interested citizens or companies from Berlin. The initial purchase of a tree supports its construction. Throughout the following years, the owner then earns money by selling the produced energy to the coordination center. In the near future, Berlin’s citizens will be sitting on their airfield, in the shadow of their own solar tree.

The conceptual and physical connection of the power plant with the surrounding development guarantees, on one hand, a diverse mix of users and functions for a steady energy demand, on the other hand, the proximity of interested investors and research partners for the operation of the plant and the improvement of solar technologies.

Each tree consists out of two main elements, a solar balloon, the tree crown, and an aluminum pillar, the tree trunk. The balloon with a diameter of 12m is constructed from a transparent shell with a gas impermeable coating on the inside and a print of 3rd generation solar cells on the outside. Such Dye Sensitized Solar Cells are flexible and can reach 12-14% efficiency for direct, as well as indirect sunlight. Arranged in a hexagonal pattern around the balloon, these cells guarantee the energy production, irrespective from the balloon’s behavior in the wind or sun (turning, respectively rising or falling). Using an integrated cable within the rope that connects the balloon with its pillar, the energy is then fed into the power plants system.

Solar balloons do not require expensive gasses or fossil fuels to generate the necessary buoyancy to fly. A mixture of affordable purging gases (H2 and N2) as well as air keeps the balloon at a neutral weight. Arranged in 120-degree segments, black lightweight foils in the interior of the shell harvest the sun’s energy to heat this gas. With rising temperature the gas and, thus, the balloon’s diameter expands by 1 meter by folding out an additional segment. While its weight per volume decreases, the balloon slowly starts to rise until reaching a maximum of 40 meters height. When cooling down due to clouds or the setting of the sun, the balloon will naturally start it’s descend. Led by its robe, it safely finds its way back to the pillar, where, if necessary, the gas mixture can be readjusted through the automatically connecting valve. With sunrise, the process then starts from the beginning.

While the balloon is flying, its constant nagging on the rope due to wind forces and updraft starts to spin a flywheel connected to its reel. An attached generator is able to turn these forces into electric power. If necessary or in case of high wind velocity, the generator can also reverse directions and pull the balloon back down onto its trunk, while using the before generated power.

Finally, flying objects have come back to Tempelhof. Additionally, the cycle of rising and falling solar balloons visualizes the power of solar energy to the city of Berlin and triggers the discussion on solar power generation. Depending on the varying solar radiation of the day, this cycle repeats in different balloons at different speeds.